Last week we announced the existence of The Fullbright Company, simply as an organization: who we are and why we started this enterprise. We’ve been blown away by the outpouring of support and interest from gamers, journalists and other developers. It’s been a good week.

But we’ve only talked about the company thus far, when what we really want to show people is the game we’ve been working on for the last few months. So today we’re going to do a little of that.

Here are a few in-game screens: 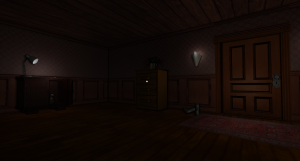 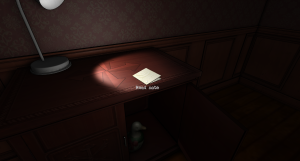 An in-editor screenshot of the space we’ve built out so far:

And here’s some work-in-progress video captured from early in the game, demonstrating our core exploration and investigation mechanics:

Hopefully the video demonstrates the basics of what Gone Home is all about: exploring a modern, residential locale, and discovering the story of what happened there by investigating a deeply interactive gameworld. We’re really interested in pushing toward simulation, both in the sense of the physics system but also in allowing the player to open any door or drawer they’d logically be able to and examine what’s inside, down to small details. If we do it right, these interactive and simulation elements will work together to make you that much more invested in discovering the story woven into the environment.

To answer some questions about what we’re showing:

So what’s next? This is the biggest chunk of Gone Home that we’re going to show until we do a full trailer and reveal, probably later this year. But in the meantime we’ll be showing bits and pieces in blogposts here to demonstrate our process and our progress: how we’re developing the story and tone and detailing out the playable space; how Johnnemann is coding all sorts of functionality in Unity; how Karla is developing the visual look, and working with talented friends of ours to bring in music, sound and environment art.

Thanks for checking out what we’ve got so far. We can’t wait to show you more of Gone Home!

Co-founder of The Fullbright Company
View all posts by Steve →
This entry was posted in Media. Bookmark the permalink.