One way that we consider ourselves lucky is having lots of talented friends who are contributing to Gone Home. From Kate Craig tackling environment art for the game, to Chris Remo composing the game’s music (another blogpost in the making!) to Syd Kalenda stepping up on the community management front, we’re surrounded by really awesome people pitching in to make Gone Home a reality.

Another piece of the puzzle: Emily Carroll, an illustrator, comics artist, and friend of the company, who’s completed an amazing title splash screen for us/desktop wallpaper for you. Check it out! 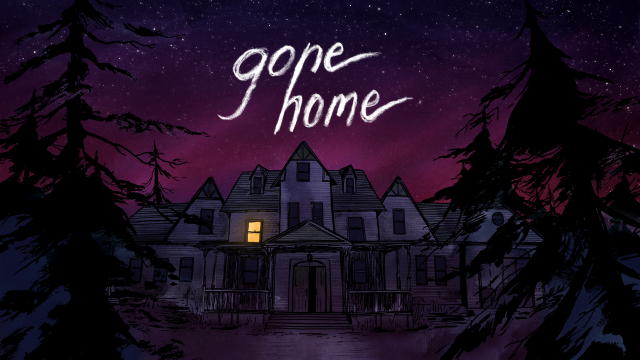 How did the piece come to be? It was a collaborative process between us and Emily (which consisted of about 5% nudging from us, and 95% Emily taking the idea and running with it.)

It started with a brief: we wanted “the house surrounded by trees, silhouetted on a hill against the dusk light.” We also sent along a really rough drawover based on the layout of the house in the game, over top of an image of an old Victorian that Karla found online.

Emily had played an early version of Gone Home, so she jumped right in with her own distillation of the tone we were going for: “mysterious but also melancholy — something undefinable but bittersweet.” Spot-on.

Based on this, she did a layout sketch to give us an idea of the composition she had in mind. 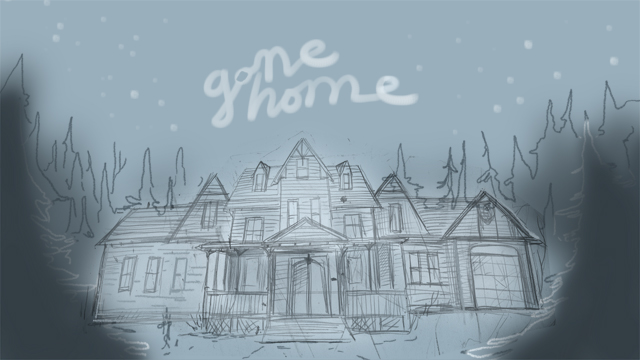 Often the artist’s first vision of a piece ends up being the way to go, and we could tell Emily had a strong idea for how she wanted to approach this. So we gave the thumbs up, and she went straight to color compositions and variations on the logo.

Deciding on the color approach to take was a balancing act. While Gone Home is a spooky, atmospheric experience, it’s not outright horror. And while mystery and strangeness are key, there are no supernatural elements in the game (magic, ghosts, demons, etc.) Composition 2 felt like it navigated this territory just right: mysterious, intriguing, and just a little ominous, without looking scary or too mystical.

Similarly we settled on options 3 and 4 from the logo sketches. They’re very different, but both communicate a kind of handmade, careful-but-imperfect approach that gives them an intimacy and innocence we liked. We ended up using 3 in the final piece because it just meshed so well with the dusting of stars that Emily worked into her finished painting. Logo 4 will find its way into the game eventually, though.

In the end Emily created an image that we think speaks directly to the feelings that drive Gone Home. We’re using it as the header on our brand new Facebook and Google+ pages (thanks Syd!) and offering it as a desktop wallpaper download here, for your home computer or mobile device. Head on over to the Wallpaper page and try one on for size!

Next time on the Fullbright Company blog: how an abandoned house in Japan has fundamentally influenced our approach to story and design.

Co-founder of The Fullbright Company
View all posts by Steve →
This entry was posted in Art, Media. Bookmark the permalink.

1 Response to Painting and Process