Sounds of a House

Gone Home takes place in a big, old, creaky house, and a major part of making the place feel real is going to be how it sounds. Squeaky boards, rattling doorknobs, clacking light switches. So, to capture that authentic sound, we asked for help from our friend Jen Foley, who works at Rejuvenation here in Portland, OR (and has a sweet recording mic to boot, for recording her podcast.) It’s a little bit totally, weirdly appropriate that Foley should have helped us capture sounds on-site, the industry term for this being “capturing foley.”

Once the store shut down for the night, we got to work recording all sorts of stuff we’d need for the house. Such as those old, clacky lightswitches I mentioned!

You can see from the background what an eclectic place Rejuvenation is. We had tons of stuff to work with.

For instance, this great old bell hanging over the entrance to the cafe:

There’s an old servant’s quarters from the early century in the Greenbriar house, with some disused old bells that in a prior era would summon servants to different rooms. The system for ringing them from afar has been torn out by the time you’ll visit the house, but the bells are still down there, in the basement…

Speaking of the basement, the door to it is locked with a rattly old doorknob:

There were also a bunch of awesome old metal filing cabinets around, though Rejuvenation being a hardware store, some were filled with stuff that might not be kept in the drawers of the Greenbriar house, as Foley notes here:

She was also kind enough to explain her shirt for the benefit of you, the viewer:

We also captured a number of “impacts,” to play when you drop something on a surface. Some things have very specific sounds, like a ballpoint pen:

Other sounds are more generic, such as a dull thud we could use for a variety of objects. In this case, we employed our very special “Sound Effects Avocado.” 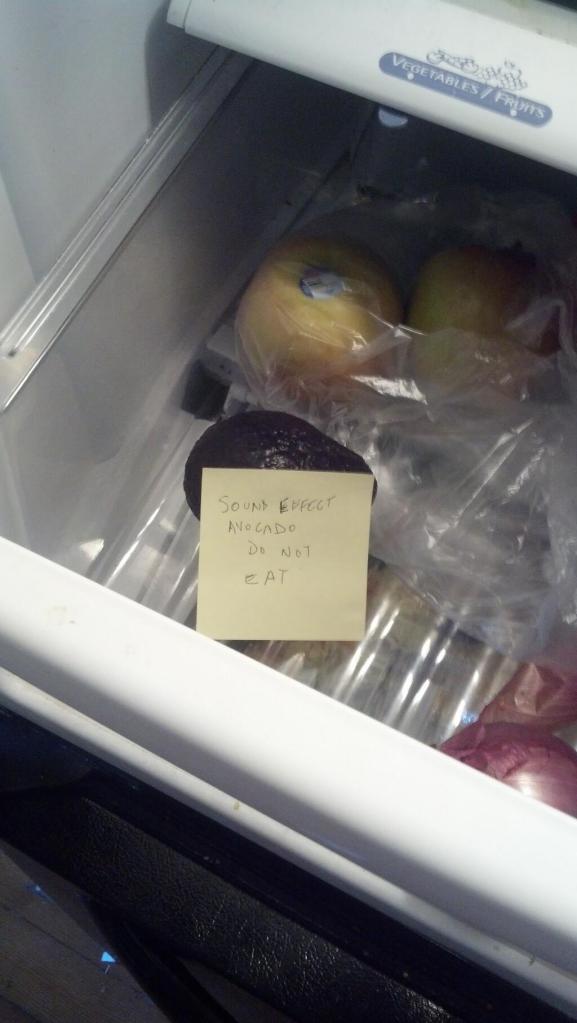 How is Sound Effect Avocado used? By bumping it on the floor of course!

You’ll be happy to know that, after making sound effects, Sound Effect Avocado also made a delicious guacamole.

We had a great time grabbing tons of sounds. We want to thank Foley and the folks at Rejuvenation again, and we can’t wait for everybody to hear this stuff while they explore the Greenbriar house!

Co-founder of The Fullbright Company
View all posts by Steve →
This entry was posted in Sound. Bookmark the permalink.

2 Responses to Sounds of a House